I keep seeing it play over and over in my mind.  We are practicing hole shots.  I’m in 4th place, my gears are messed up so I had a bad start.  We are flying into the first berm, the 6 foot one with the near vertical wall.  The rider in the second spot, Ben, perhaps the best rider among us, the fastest hits the wall wrong and instead of whipping through the turn is launched off the top.  His bike sails 15 into space as he does a Superman 10 feet above the ground before I lose sight of him as I rail the turn.  As I come out of the turn and look back I see the bike coming to a stop in a cloud of dust.  Before I can make it to him he is up, calmly saying he broke his wrist.   The bone did not come through the skin, but it clearly is broken. Both Knees are torn up and the blood is just starting to seep out.  His kit is covered in dust, but surprisingly has no holes.  He does not shed a tear, nor a curse word or even utter an ouch, and shows true grit .

As I tried to go to sleep last night I kept seeing it over and over.   What made the scene so hard for me is that it was one of the El Grupo kids.  Having spent so much time with them I am starting to see each of these kids as a part of my family.  It’s bad enough when anyone crashes on a bike, but when it’s a kid, and a kid you really care about, it is mentally taxing. 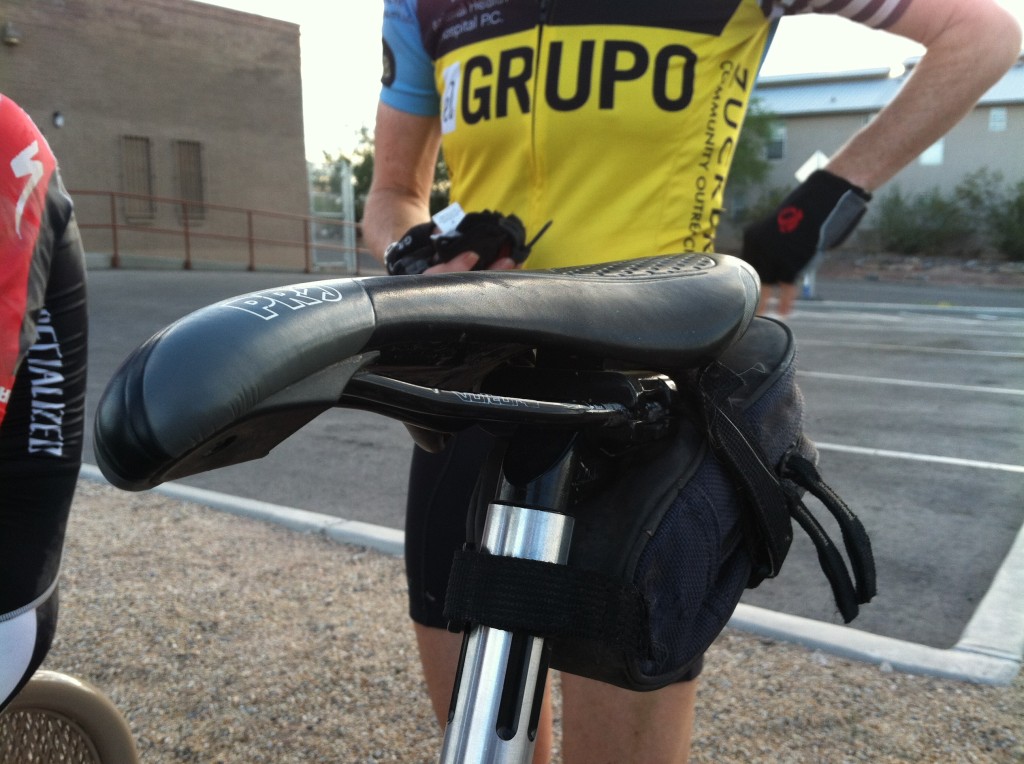 The bike was in otherwise fine condition sans saddle.

What might have been the most challenging part of this for me was that we were still early into practice.  This weekend in the first race of the high school Mountain Bike League and we still needed to stretch the legs.  Coach gave me some drills and told me to continue with the practice as he kept Ben company. What followed was one of the most somber and lifeless practice I’ve seen with El Grupo.

The ‘A’ Team definitely took it harder.  These kids are tight knit. After years of riding, training, and racing you can see that they are a true TEAM.  Even though there are many races to come, they are all stoked at the start of the High School League and having a friend and team leader go down hurt.

What really struck me was the reaction of the other riders on the team.    The rider who was closest to him during the launch was very melancholy.  I attempted to engage him in conversation, but he was not very talkative.  It was clear, and in conversations afterwards with others, that he felt responsible for the accident.  Having watched it all, he definitely had no responsibility.  It was just one of those things that happen when you ride and race.  You are going to have the occasional crash.  However, it was nice to see a level of concern from one so young that he was willing to take partial responsibility, deserved or not.

One of the kids who Ben has described as “overwhelmingly nice” really impressed me. Even if you did not know him, just watching form a distance you could see the empathy in the look in his eyes, his body position, his tone and voice.   He told me how much they have been practicing and his desire to lead Ben out for a podium in the race this weekend.  His disappointment was only equal to his understanding of what it is to be a team player.

Another kid said that Ben would want then to continue with practice and be as prepared for this the race as possible.  I see this as an admirable trait.  The recognition that something bad just happened but that there was nothing they could do about it at that time, so get on with life.  Ben was with Coach, his Dad was on the way to pick him up, we had a job to do, so “get er done”.  This is the kid I want heading up FEMA someday.

The B and C teams felt very bad, but you could tell that the relationship is not the same.  They were naturally curious how he was doing, but I did not feel the same depth of emotion.  It is possible that I was focusing more on the other riders and just did not pick it up.  I do think that it slowed many down as they came into the tighter parts of the course, but on the mental side I could not say.

Of course no one ever wants to see someone they care about get hurt, bu this, like so many of the challenges will make the team and the individual riders better.  I have been messaging back and forth with Ben today.  He is in for a 6 week recovery and a small surgery to hold the bone in place is not out of the question.  He gave me permission to mention him by name, otherwise, I would not have. Knowing him, he will be on the trainer tonight and will come back even stronger.  Heal well my young friend.