In case you missed it, in the past week Specialized Bicycle Co. received a huge backlash for sending a cease and desist letter to a small bike shop in Canada called Café Roubaix.  Specialized has a bike called the Roubaix and were alleging that the bike shop was infringing on their copyrighted name.   The social media backlash that supported Café Roubaix was incredible with their Facebook fan page ballooning to nearly 15,000 likes and Specialized bashing became a trending topic.

It was a publicity nightmare for Specialized and it only became worse when Fuji Bikes announced it was the actual owner of the Copyright for Roubaix and they licensed it to Specialized.  Specialized’s CEO flew to Canada and offered a personal apology to the bike shop owner and said they would not follow up on the cease and desist, but the damage is done.

This morning I saw another post on a clothing apparel brand called Epix Gear saying they have also received a cease and desist from Specialized because their logo resembles specialized.

Is this corporate bulling?  What is the appropriate way to respond when someone takes a name you have been building and uses it?  I have a local example that is similar to the Specialized/Roubaix example, but in this case it is Corporation using a non-profits moniker.  It involves a local non-profit, Look! Save a Life and Allstate. Allstate has a new safety campaign to try and tackle the accidents involving bicyclists, pedestrians, and motorists on the roads of Tucson.  The program is called “Tucson on Two” and one of the first ads has the slogan “Look Twice, Save A Life”, but this program has nothing to do with the local charity, “Look, Save  A Life Arizona”.

At this time, having seen the public outcry towards Specialized I think any company that is in the cycling industry and makes a stink over copyrights has the potential to see it explode in their face.  What makes this case with Look, Save a life even harder is that the message that “Tucson on Two” is promoting is very much in line with the safety message that the charity is a proponent of.  It is easy to say, how can more of good thing be bad even if it is potentially confusing a brand identity.

I spoke with Kylie Walzak at Living Streets Alliance (they are also a part of this campaign).  I opened the conversation by asking is she knew anything about “Look Twice, Save A Life”.  She relied that she knew Brendan Lyons (the founder of Look! Save a life).  If that is not a clear indication of how confusing this is, I’m not sure what is.  I also talked with the City Of Tucson and am told the signs and billboards are only a small part of the Allstate campaign.  They said the slogan of Look Twice grew organically and that they choose it because it was catchy and conveyed the message.  Was it so catchy because they had been hearing it for a few years?

A little disclaimer I feel I should ad in here.  You might notice on this blog that I have the Look! Save A Life Logo and a link to them.  I also have been helping them with publicity for nearly a year.  I am an administrator and create some of the content on the Facebook Page.  However, I do not have the final say in anything that they do.  This article and my conversations with the City and LSA were in an attempt to create a dialogue that will lead to a win-win outcome and avoid any negative mojo.

How do you feel  Look! Save a Life should respond? 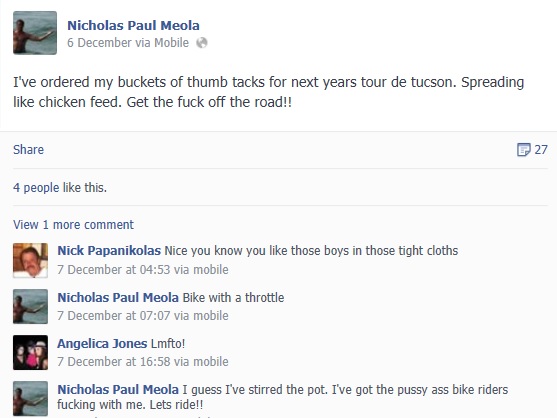 This previous facebook status was posted by Nicholas Paul Meola.  I do not know this man, but a friend saw it and shared it with me.  It is nice to see the community is paying attention.

I keep asking myself “is there a way to communicate with someone like this?”   I read through most of his posts and looked at his photos trying to see if I could find some common ground with him.  I really like to think I can find common ground with anyone if I look long and hard enough.  Apart from his apparently being of human nature with an offspring, I’m coming up empty.

How do we communicate with someone that is so aggressive in nature?  Is it even worth the effort?

The following are some of the comments on the various facebook pages that got the most “likes”.  .

“I think this post is actually dangerously close, or outright crossing the line of criminal intimidation, bro. Has this kind of sabotage actually occurred in Tucson in the past? Does this coward’s post literally cause concern or fear that he will follow through? If it scares or intimidates local cyclists, it is quite possibly illegal. If you have a local bike advocacy group, I think they should investigate filing charges. It might actually violate some kind of hate speech law as well.”

“What’s worse – I checked out his page just to see if he was legit… finding not only, but I actually share 3 friends with this jerk. I may be 5 degrees from Kevin Bacon, but only 2 from excrement.”


“One thing is certain – if there are tacks on the road at the TdT, this post needs to be brought to the police and this dick should need a strong alibi. Definitely take some screen shots to file this away. If he is involved anywhere with violence against a cyclist, his hate posts can and should be used as proof of premeditation.”

“What an asshat. His pics show his license plate. If you see a pickup with 571 XBG around Tucson maybe let the air out of his tires.”

”That guy should be sterilized.”

“Buy thumb tacks and spread them thru out his drive way to front door and all over his yard.”

“these fucking, blow hard, ignorant, hateful, violent pieces of shit. total fucking douche nozzle, this sack of crap is. this type if garbage is the same twat nozzle that will blare a horn at 45 mph but won t even look at you at the red light because they know that the quads of justice can kick a fool until he can t see. pussy.”

“He also must not like his own community. Because I’m sure the Tour brings revenue into the city, otherwise they wouldn’t run the race. Also what douchebagery of astronomical proporty”.

“May he be beat ceremoniously with frame pumps”

“Report his status as potentially violent behavior OR possible vandalism”

Santa Clause was seen this weekend at Buckelew Farms at Swan And Sunrise Picking up a tree with an elf.  After loading it onto a tow behind Sled he and the elf were observed riding East Towards Sabino Canyon.

Drivers  waved enthusiastically and honked horns as they passed the Biking Santa,  many even pulling U turns to came back and snap a photo. 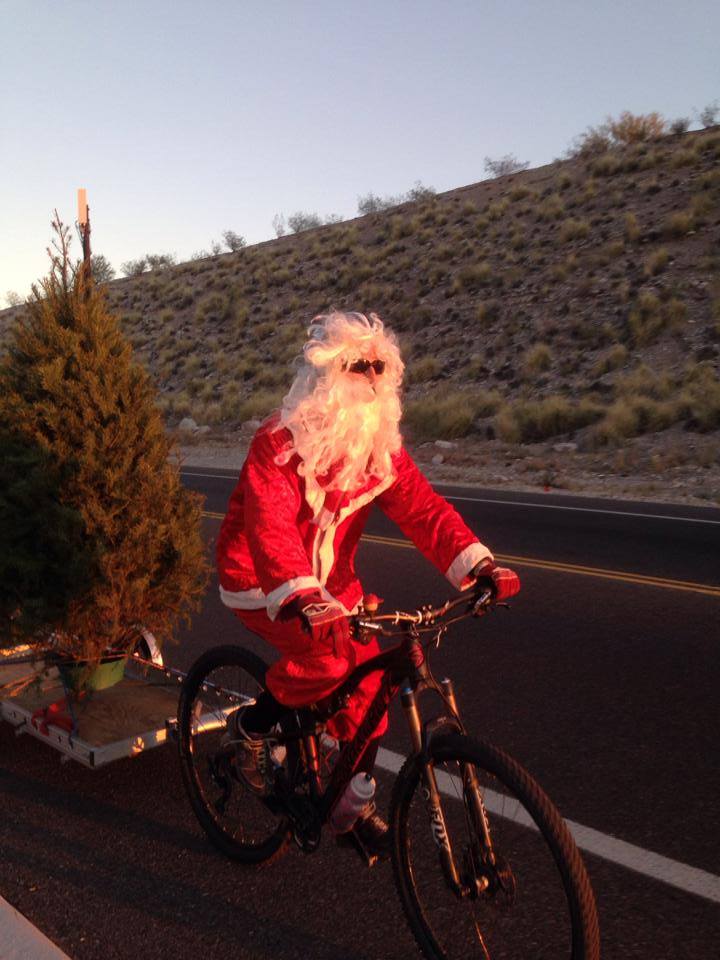 When asked why he was in Tucson on a bike Mr. Claus responded “this is part of my physical training in preparation the big night later this month.  I’ve put in over 5,000 miles in the saddle this year and climbed over 250,000 feet.  I feel the best I have in years.  Only issue is Mrs. Claus is going to need to bring in all my suits.”

When you get your tree go to a Local. Buckelew Farm has 8 Locations:

THANK YOU FOR SUPPORTING YOU LOCAL FAMILY FARM

We use a small farm in Oregon and we are their largest client.  One advantage of working with a small farm is that we are able to pick out the best quality of trees for our customers.  Another advantage of working with a smaller farm is that when the trees are cut they are loaded on the truck and come to us the next day.  This differs from the large box store suppliers who cut hundreds of thousands of trees to supply their chains.  The big box store farms start cutting trees in October and storing them so the trucks can start hauling all over the country.  This means you could get a tree from a box store that was cut over a month ago versus our trees that are cut the day before they get loaded.  For this reason, we can guarantee the trees throughout the holiday season and ensure our customers have the best quality there is to offer 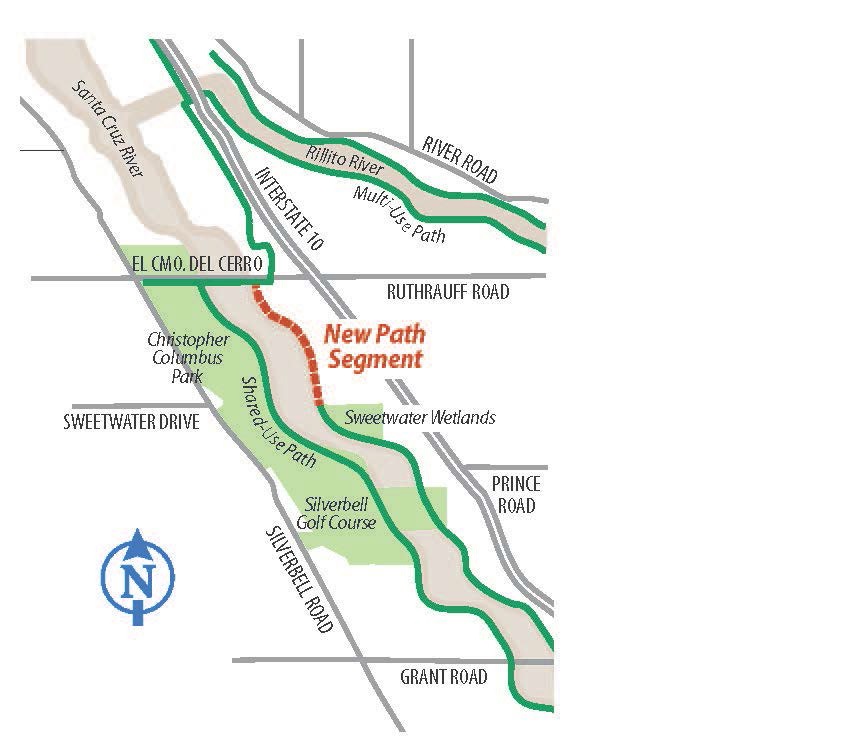 The Loop will be paved from Silverbell Wetlands to El Camino Del Cerro in early January, 2014

Bicyclists and pedestrians will be able to travel along the east side of the Santa Cruz River between Silverlake Road and Ina Road – more than 13 miles – and cross only two streets at-grade when Pima County completes a paving project on The Loop in January.

Personally, I think this new stretch is one of the most exciting sections of the loop if you are into bird watching as it will go past the Sweetwater Wetlands.    I have had many memorable experiences exploring in this area.  The one ride that comes back most vividly is of thousands of migrating birds taking flight as I rode past.  The flock would fly a few hundred yards before landing and by that time I would be approaching again and they would take flight.  This went on for nearly a mile.

The other crossings are separated underpasses of the main roadways.

Paving of a 12-foot-wide path is expected to begin next week to connect The Loop on the east side of the Santa Cruz between Sweetwater Drive and El Camino del Cerro, the last unfinished segment between Silverlake and Ina.

The path is being installed by the Ashton Company and is expected to be completed in January.

Bicyclists and pedestrians can travel on The Loop on the west side of the Santa Cruz between Silverlake Road and El Camino del Cerro, crossing at-grade on Congress Street. At

Pima County is developing The Loop around metro Tucson with links to Marana, Oro Valley, and South Tucson for residents and visitors on foot, bikes, skates, and horses.

When completed, The Loop will total 131 miles and connect the Rillito, Santa Cruz, and Pantano River Parks with the Julian Wash and Harrison Greenways. The Loop connects to parks, trails, bus and bike routes, workplaces, schools, libraries, restaurants, hotels and motels, shopping areas, and sports and entertainment venues.

Pima County has created a new jersey to celebrate The Loop.

Aren’t you just batty about The Loop? Then you’ll love these new Bat jerseys. Just in time for holiday gifts for friends and family. Just don’t forget to get one for yourself. Visit The Loop for more information.

You can pick up your jerseys at Pima County Natural Resources, Parks and Recreation at 3500 W. River Road. To order jerseys or check on available sizes, please call 520-877-6000 or email FrontDesk.NRPR@pima.gov. Cash, Visa, and MasterCard are accepted. There is an additional charge for postage if your items are mailed to you.