The following is a response to comments I have had with Supervisor Ally Millers office and an article that was written in TucsonVelo .  Personally, I felt that Supervisor Miller articulated her support for the Loop much better in our phone conversation.  I asked her to prepare a statement showing her 100% support for the funding of and finishing of The Loop. She fell short in my opinion with this statement.

Do you have an event coming up on the Loop?  I said I would invite her to one and she has said she will attend.  At that time, I’ll again ask for her unconditional support of The Loop.

As Always, If you care, contact your elected officials.  Her numbers and her statement are below.

PIMA COUNTY BOARD OF SUPERVISORS DISTRICT 1

To the Tucson bike community and Tucson Velo newsletter,

I recently published an op-ed piece in which I offered suggestions on how Pima County could prioritize their spending and use leftover funds to fix the dilapidated roads. I made a comment (below) regarding the LOOP and I would like to clarify that I am a supporter of the project and the interconnectivity and exercise potential it provides to County residents. I could have been more artful in my language, and I am not anti-bike or anti-LOOP. As a matter of fact, I regularly enjoy using these walking paths/bike trails for recreation as I do not have to worry about traffic and I am able to appreciate the scenery of the mountains.

My statement was as follows:

“The Loop, which is a bike system along the various river beds, is estimated at a total cost of $84 million. These trails are important for erosion control but connecting the bike routes added millions to the cost. While this is a nice addition to the community and billed as an economic driver for tourism, do we believe visitors don’t notice the roads they drive on while they are here? Riding bicycles on these roads is a hazard to the health and safety of all residents and visitors to this community.”

The point I was trying to make in my statement was regarding the condition of our roadways for both bicyclists and drivers visiting our community. As a Pima County Supervisor, I feelbembarrassed that our main arterial roads are in such a state of disrepair that it will take over $270 Million to bring them up to “good” condition. Tourists, visitors, and riders in the El Tour de Tucson (amongst other races) surely notice the state of the roads they compete on. Many of my bike friends have told me that they spend more time dodging potholes than they do actually getting in a good training ride. I ran on a platform of fixing the Pima County roads, and I intendto continue my fight to do so. 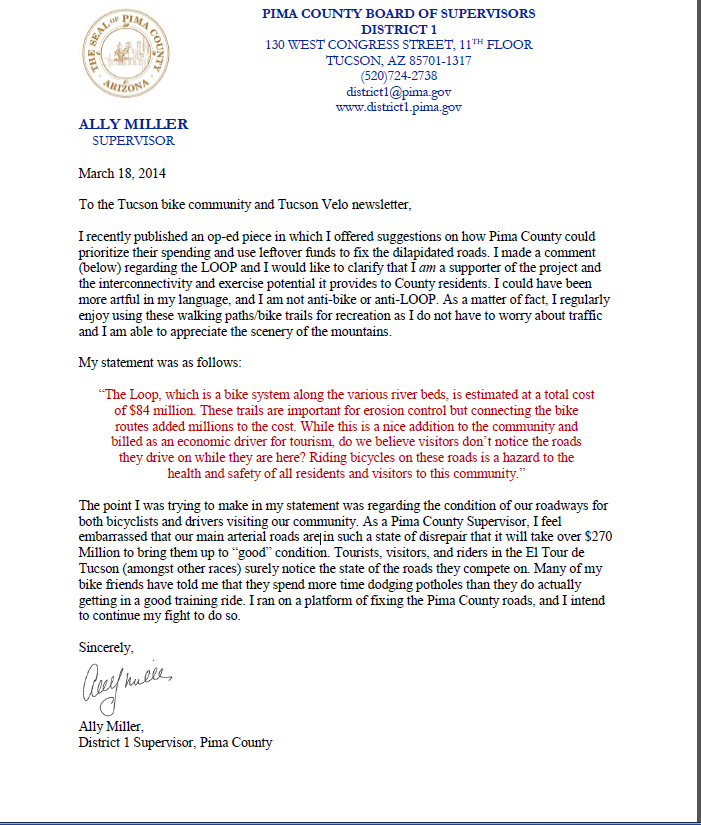 The TBC is a three day USA Cycling sanctioned stage race (time trial, road race, circuit race). You must complete each stage to enter the next.

I went to this race wearing many hats.  Father, Coach, Cheerleader, Photographer, Spectator.  The only role I did not play that I would have done differently is athlete.

For the weekend I shot over 7000 photos and have them broken down in the following categories.  People and Podiums, Time Trials(Men and Women), Road Race and Circuit race.  They are all on facebook, but even if you do not have an account, you should be able to see them.