With everything that happened with Brendan Lyons this past week I never had a chance to write about the Tour Of The White Mountains.  Better late than never?

Tour of the White Mountains.

Have you had that break through moment in a race that makes you look back on that event with fondness.  The TWM was the first race where I pushed myself to a level that has in many ways defined me ever since.  It was about a year after I really got into riding, my longest Mountain Bike ride going into the race was perhaps 30 or 40  miles.  I signed up for the 60 mile race( Oh, for the record, I love him like a brother, but Epic Rides mastermind Todd Sadow can’t count- it was nearly 70 miles).  Summary: Made cut off by only a minute, was a mile past the last checkpoint when I flatted, my saddle bag was open and I had no spare or tire lever, I pumped the tire, rode a mile, flatted, pumped it again, rain started, rode half a mile, flat, mud, could not get tire pumped, more mud, mud and pine needles, mud like peanut butter, tires not spinning as a result of mud, walk, soles of shoes fell off,  carry bike 8 miles to finish.    Loved every second of it!!!

This year I was heading up to take pictures and enjoy the company of the bike community.  My good friend David Tang was good enough to drive and had an extra bed in his cabin.  We also had in our company a UA med student, Seth Turner, and David’s dogs, Taco and Tamale.  Mentally I was set for a mellow weekend and a short ride with thousands of pictures.   Somehow, plans changed and I somehow found myself entered in the 50 mile event.  I‘d like to tell that story, it’s a good story, but to protect my sources I will skip it.

David, Seth and I had a plan for the race.  Ride together. Push hard in the beginning.  Ride strong.  Finish strong.  Drink Beer.  It was a good plan.  It fell apart somewhere on the ride from the cabin to the start line  when we missed the gun by 15 minutes.  It quickly proceeded to a social ride.  I would ride ahead, take photos, let them pass, take photos, ride ahead, take photos, take photos as we rode, take more photos, have David tell me how annoying it is having someone ride casually past you taking photos.   It is my favorite type of ride.  Put in 20-45 minute efforts and then relax for a few minutes.  If we saw a pleasant meadow, we stopped and had a snack.  Aspen trees-stop.  Cows-stop.  Heavy equipment-stop, climb, photos.  After every stop we would catch the same riders who passed us throughout the day.   We took time at every opportunity to chat and thank the volunteers and eat oreos, pickles, and sandwiches at the aid stations.    Boys out playing on their bikes!

About 10 miles from the finish Seth decided to pick up the pace.  At about that time David busted a nipple and due to rubbing had to ride brake free. He was in a bad mental place as he was struggling with the bike and the long time in the saddle.   I held back a short distance, offering the occasional encouragement and enjoying the scenery.

About 4 or 5 miles to the finish David passed a guy who was off his bike.  I stopped to ask what the issue was (and to get a photo).  His bike shirt was in the design of a tuxedo and he had one of the most stunning handlebar moustaches I’ve seen.  He was a big boy, tall, solid and 240 pounds.  His trouble was that due to his massive size he had broken his chain.  He found a master link and fixed it once, but snapped it again.

After introductions, (his name is Jeff) I told him to get on his bike and I’d try and push him.  On the flats it beat walking, but it was a struggle for me to keep him moving.  It became especially challenging on the single track as I was forced to ride one handed, on the side of the trail and avoid rocks.  On the uphills he had to walk.  He encouraged me to leave him, but I was content to talk with him and make his ride pass faster.  Every checkpoint we passed they told us it was 2 miles to the finish.  3 times we were told 2 miles.  It almost became a joke (Apparently not only can Todd not count, but it is contagious and all of the volunteers are mathematically challenged).  At one point I decided to try and pull Jeff instead of push.  I was feeling it and was hoping a new position might help.  It was awesome.  It worked so well I was even able to pull him up the hills.  I grabbed his camel pack under his arm, leaned away from him as hard as I could land was able to grind out the last few miles.  At one point I told him I needed to put on my music and disappear.  At the end of a 50 mile ride I admit I was feeling it.  A few times we bumped handle bars and it felt like we were going down.  However, we rode to the finish with me holding onto the camel pack as we crossed the finish line together. 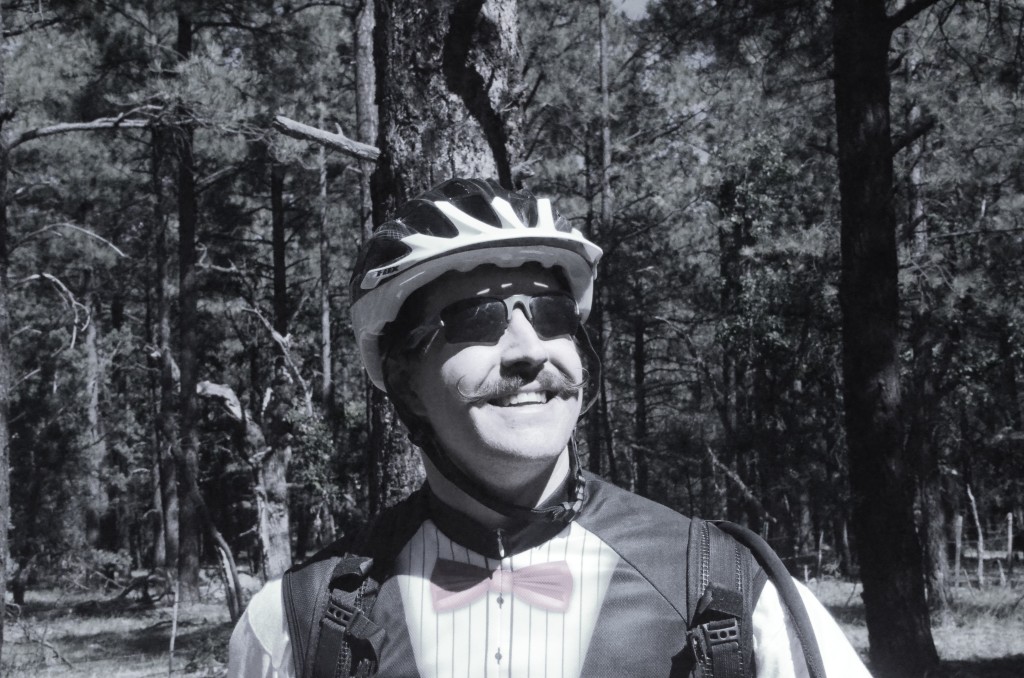 The race is put on by Epic Rides and it lived up to the name “Epic”.  New Belgium beer was pouring free beer, my favorite type, at the finish line.  Jeff and I had a toast to his finishing  and I ran off to watch the award ceremony.  I was loving life as many of my friends were getting hardware.  After the last award was presented, Todd Sadow said he had a special announcement.  He called Jeff and I up on the platform and recapped the last few miles of our ride to the audience.   I was on my second beer by that time(recovery fuel) and must say, physically and mentally, It really felt good.

I never expected that I’d have a ride in the TWM that would be more memorable than the day in the mud.  However, I think this day surpassed that one for one reason.  Friends!!!  Both new and old.  If you are reading my blogs, you might have noticed how much I value community and how determined I am to bring the cycling community together.  Physically, this might have been one of the greater challenges I’ve ever had, but mentally this fuels me.  I’d gladly have pulled Jeff another 5 miles and would do the same for any of you.  We have something really special going on with the bikes and I can’t wait to get out there and meet you on the trail.  Thanks for reading.